The VCM has flaws, but it is the most established tool we have to coordinate on financing climate solutions on a global scale.

In the past week, British newspaper The Guardian and German publication Die Zeit have published articles that harshly criticize deforestation-based carbon credits, specifically stating that ‘90% of rainforest offsets certified by the biggest carbon standard — Verra — are worthless’.

Since these pieces were published on Jan 18/19 2023, we’ve taken time to learn, to listen to and read the comments of various stakeholders and thought leaders in the VCM, before formulating our own response.

We fully acknowledge that the VCM in its current form has serious flaws that apply to almost all stages of the value chain. And we fundamentally agree that press and academic researchers have a key role to play in independently assessing how effectively the VCM serves its purpose of financing high-impact climate action. But for the sake of developing the market further in a constructive way, we urge to sustain from portraying nuanced topics in a one-dimensional or misleading way. This especially applies to publications that do not propose viable alternatives to problems they’ve surfaced.

As written in an open response by goodcarbon:

The Guardian and DIE ZEIT’s recent articles rightfully highlighted the need for quality and integrity in the Voluntary Carbon Market. However, the articles put at risk an entire market despite the scope of investigation only concerning one specific project type: REDD+ projects. All other project types, such as reforestation, regenerative agriculture or mangrove restoration, are not discussed.

It is crucially important that journalism puts a focus on the challenges we as humanity are facing in addressing the climate emergency, and to educate the public and raise awareness on the tools and methods we have at our disposal. Carbon markets do need more scrutiny, especially as more and more capital flows to compensating for emissions and funding impact projects. We appreciate the Guardian and Die Zeit for the investigative work they've done in order to help the world better understand the impact of reforestation projects, and are thankful for the discussion they’ve started. At the same time, we value well-informed and reasonable perspectives that counter or expand on items portrayed in these articles. As so often, the truth is likely to be found in the middle of converging opinions.

“Carbon credits, properly designed, represent a critical solution [to the climate emergency]. [They are] A mechanism to drive funding to projects that sequester carbon from the atmosphere, while regenerating nature and providing an income to vulnerable communities.
Enhancing crediting integrity is fundamental to making this work at scale.”,

It is clear that in its current state, the VCM is not yet set up to scale to the levels needed to make meaningful climate impact, and to aid companies and governments to achieve a global net-zero status.

In the past years, experts with the right intentions and understanding of the complexities of the market have started looking at solutions to key challenges, like lack of transparency and integrity, as well as accounting issues, such as double counting. So far, the market has been lacking technologies that can help address these issues and reduce integrity risks. But this is changing rapidly. Some organizations, like ourselves at Toucan, focus on building infrastructure for more efficient, open and transparent markets. Others are working on carbon credit integrity ratings (ie. BeZero, Sylvera, Gainforest), or drive the implementation of  digital Measurement, Verification and Reporting (DMRV) forward (ie. Pachama). We are also excited by the growing role of claims label certifiers for well-intentioned corporates — these add extra scrutiny to net-zero claims.

“It’s an unparalleled public information good to reveal that carbon sequestration activity might be 70-90% bullshit. We should not fear this. We know trees trap carbon, this is just feedback telling us that we’re doing it wrong”,

In the advent of a global movement towards improving the VCM from the ground up, we see coordination and interoperability between different initiatives as key. Only with open communication, a healthy dose of scrutiny and unbridled innovation can we put our combined force behind making carbon markets better.

Ultimately, we are running out of time to address climate change, and as we work to coordinate a global response to the climate crisis, entrepreneurs, developers and impact projects are building on innovations in climate science, law, finance and economics, behavioral science and more. As with anything new, flaws will be found and mistakes will be made.

“The most worrying thing of all is that waiting for more perfect ways to keep the world’s increasingly threatened and fragile forests standing may be an unaffordable luxury”,

“Regardless of whether you think carbon markets are the right mechanism to finance forest protection, they are one of the only mechanisms right now deploying capital to the ground.”

And stated in this piece by CIFOR-ICRAF is the following:

“Effective REDD+ projects can reduce greenhouse gas emissions, support the rights of Indigenous Peoples and local communities – and the women within those groups – as well as reducing deforestation and forest degradation and providing additional tree cover in agricultural landscapes.”

To sum it up: We believe it’s key to focus on how to improve efficiency, instead of scapegoating the entire REDD+ practice.

Diving into the detail

We are grateful for sophisticated journalism bringing the topic of deforestation to the forefront of conversation. But, in our view, the analysis by The Guardian only highlights key pain points with deforestation carbon credits, while failing to describe the problem of deforestation properly. We also think it should have contained a review on where we as humanity stand with addressing this issue.

As the latest report from the Systems Change Lab, ‘State of Climate Action 2022’, illustrates, deforestation remains a massive problem in the fight against climate change, and all efforts fall vastly short to address it. The report states that to avoid increasingly dangerous and in often irreversible climate impacts, and to close the gap to 1.5°C -aligned targets, reductions in annual deforestation rates need to occur 2.5 times faster. To date, 99.9 percent of successful CO2 removal has been achieved through what the scientists call “conventional CDR on land.” This includes creating new forests, restoring previously deforested ones, better managing soils and using more durable wood products, as this article states.

When it comes to carbon removal and forest protection, numbers show that, so far, all initiatives by governments and the private sector are falling short. Regulations, pledging deforestation-free supply chains or supporting VCM projects like REDD+ are not enough for meaningful climate action at scale in any case. Additionally, the kind of mechanisms addressed in the Guardian analysis — where one needs to validate a ‘counter-factual’ — will never be 100% accurate. Solutions eliminating some of the issues of uncertainty and risk management could be the application of DMRV (digital Measurement, Verification and Reporting) tools, and dynamic baselines. And, of course, social justice challenges associated with REDD+ projects also need to be addressed, so that indigenous communities feel supported in their quest to protect nature, and are not banned or excluded from their land. Reports show that, ie. areas of the Amazon titled or under formal claim by indigenous people have been some of the most secure and reliable net carbon sinks over the past two decades, sequestering more carbon than they’ve emitted.

Additionally, humanity is very focused on carbon removals — planting new trees with lead time to grow and capture carbon. But it is of course also important to not cut the existing trees — which is the category that REDD+ falls under. We can compare this to the discussion of energy efficiency/saving vs. energy transition to renewable energy: We ideally need all of these processes at the same time, implemented in a trustworthy manner.

How blockchain technology can benefit the VCM

Factors like improved transparency and more efficient marketplaces, where carbon credit sellers and buyers can directly interact, can be tackled by leveraging blockchain-powered infrastructure. Due to the open nature and interoperability of systems based on blockchain technology, everyone can continue building out technology and applications that address issues and improve the market. And an carbon credit meta-registry — like the Open Climate Registry we’re building at Toucan — lets everyone track carbon credit movements across standards and registries, while retirements backing net-zero claims are publicly available and can be verified by anyone.

Toucan is committed to accelerate the adoption of new blockchain-based technologies for the VCM in a sensitive manner and in collaboration with important stakeholders. We are embedding carbon credit information, trading and retirement data in the Open Climate Registry, where everyone — individuals and corporations — will be able to browse carbon credits across different registries and standards. This allows companies and people to make informed decisions when investing in climate projects. And since metadata associated with individual projects is linked to their carbon tokens in the open climate registry, it becomes easier to surface areas for improvement, or projects that lack integrity. Finally, retirements done on credits recorded on the Open Climate Registry are publicly visible and easy for any net-zero or neutrality claim certifier to verify.

We are excited about the level of transparency that is possible with blockchain-powered carbon markets, and see this as integral to counter any mislabeling of carbon credits or offsetting claims. In comparison: in the current market, it is close to impossible to scrutinize the climate project portfolio of, for example, a Fortune 500 company, broker or carbon marketplace, if they choose not to reveal it.

Toucan is not endorsing any net-zero or neutrality claims, as our focus is on providing infrastructure. We currently don’t offer any carbon footprint calculations or integrated modules that match footprints with carbon credits for compensation.

And finally, we strongly agree that we need to prioritize decarbonization first, and only then rely on the VCM to compensate residual emissions. As other initiatives, like the IC-VCM, and Abacus by Verra and Amazon, also illustrate, the VCM is on a steep trajectory to increase trust. Toucan supports and accelerates this by implementing new market principles and standards based on evidence and backed by experts and oriented to maximum climate impact, with sufficient consensus and buy-in from key market participants.

🌿
What is Toucan?
Toucan is building the technology to bring the world's supply of carbon credits onto energy-efficient blockchains and turn them into tokens that anyone can use. This paves the way for a more efficient and scalable global carbon market. Learn more about us. 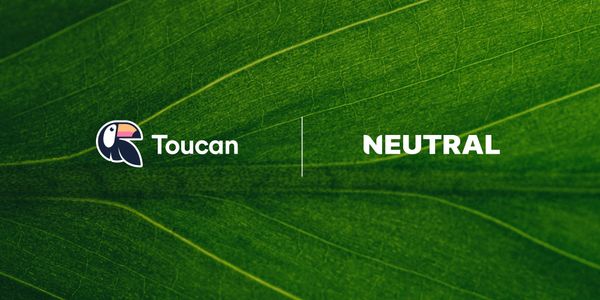 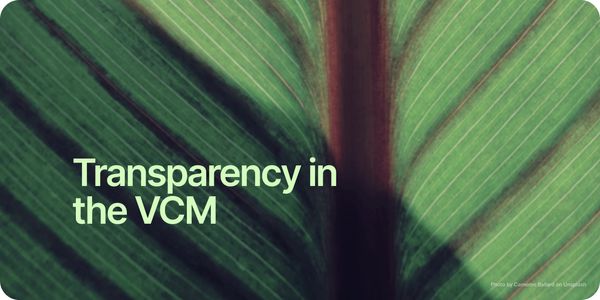 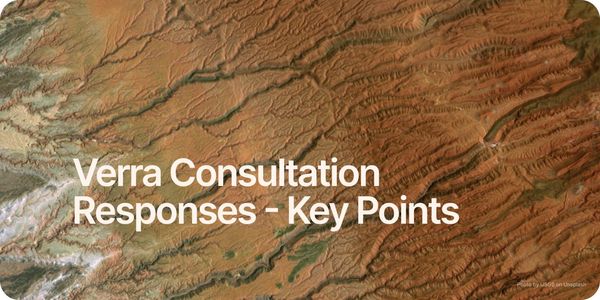 Verra concluded a consultation on the tokenization of carbon credits with formulated opinions and questions. Key points here!