Toucan Protocol is building carbon market infrastructure to finance the world's best climate solutions. These are our on-chain stats from 07.03- 13.03:

🦜 We will be at ETH Amsterdam next week! Check out what we're up to and join us here

Over the coming weeks, deCarbonized will be zooming in on how web3 can provide solutions to key pain points in the voluntary carbon market, as identified by the Taskforce for Scaling Voluntary Carbon Markets (TSVCM).

This week we introduce why the intersection of web3 and VCMs matter.

The voluntary carbon market (VCM) aims to mitigate climate change by creating space for private actors to finance activities that reduce and remove carbon emissions from the atmosphere.

Despite recent growth, VCM coverage remains marginal, encompassing less than 1% of global greenhouse gasses. McKinsey predict that demand for credits could grow up to 15 times by 2030 and 100 times by 2050, requiring a rapid scale up in VCM activity. BloombergNEF predict that credit prices could move from around $3 in 2020 to $120 by 2050, creating huge incentives to meet this demand.

While there is the practical potential for up to 12 giga-tonnes of carbon credits to be developed by 2030, challenges identified by the Taskforce for Scaling VCMs are likely to limit this to between 1-5 giga-tonnes.

These challenges, explored in the Task Force’s final report in January 2021, can be identified as 27 different key pain points currently afflicting the market. These can be categorised into five overarching themes:

While these challenges may initially be exacerbated as the market grows, new actors entering the space can also provide the innovative solutions and technologies required for VCMs to reach their full potential.

How can web3 help?

Web3 is an evolution of our current web2 based internet, which is focused on centralized content creation. Built on top of blockchains, web3 incorporates concepts of decentralization and token-based economics.

Blockchain technology has been identified by the World Bank as a key tool to support the development of evolving climate markets. Opportunities speak to the pain points identified above, tackling aspects of:

Recent months have seen growing interest from the web3 community in developing VCM solutions. The most high-profile project is that of KlimaDAO, which in October 2021 demonstrated the potential of web3 to impact traditional markets.

While the project has been effective in supporting the bridging over 20 million carbon credits from Verra’s carbon registry onto the blockchain, questions have been raised over the quality of credits involved and the anonymous nature of the Founders.

The International Emissions Trading Association (IETA) recently formed a digital task group to explore and respond to this growing interest. Initial conclusions identified that while there is indeed potential for blockchain technology to address VCM challenges, activity needs to be carefully managed to ensure that risks to quality and security are avoided.

In order to achieve this balance, greater collaboration is needed across the VCM and web3 space.

As identified by Sarah Leugers, Director of Strategy at Gold Standard, if web3 projects involve VCM players from the start then there is greater potential for these innovations to be calibrated. This sentiment is echoed by Ingo Puhl of South Pole, who discusses that collaboration is needed to identify what 'best-in-class' will look like.

These efforts will ensure that emerging web3 solutions are used as a key tool in solving persistent VCM problems, as opposed to becoming solutions seeking an application.

We hope that this deep dive will help further this conversation 🎇

The role of web3 in scaling biodiversity markets

Research by Kristin McDonald recently explored the importance of biodiversity in tackling climate change and the role of web3 in scaling future markets.

Biodiversity underpins the supply of nearly every major ecosystem service on earth. It is therefore fundamental to the livelihood and well-being of our planet and species.

Ecosystem services add real and financially impactful value to our society. It is estimated that the value of biodiversity in maintaining global commercial forest productivity alone is worth $490 billion per year, while the maintenance of pollinator diversity protects up to $577 billion in annual crop output.

Despite the massive value of these services, we are experiencing an alarming collapse in biodiversity. This is due to our current global economy’s inability to internalize the value created by ecosystem services.

At present, some companies voluntarily invest in biodiversity conservation or restoration, spawning a small but growing voluntary market of biodiversity offsets. Rough estimates put this market at less than $100 million.

Many in the industry however, are starting to see signs of inflection in the voluntary biodiversity market that are reminiscent of the evolution of the voluntary carbon markets. Companies like Nestle, Salesforce and Bayer are moving beyond net zero commitments to nature positive ones, trying to figure out how to fulfil these. This is creating new demand and setting the trend for other companies to follow suit.

Creating or implementing a biodiversity offset is challenging:

Responding to growing demand in an effective manner will therefore require a move towards biodiversity offsets as scalable, commoditized assets, able to be “sold” to offsetting organizations in a fungible way.

In a sense biodiversity already trades in voluntary carbon markets, as offsets that have biodiversity as a co-benefit. These represent the highest volume of offsets sold and fetch premiums relative to offsets without it.

It takes no stretch of the imagination then to consider a world where that biodiversity co-benefit is measured, valued and sold separately from the carbon offset it’s tied to.

Building a biodiversity market on-chain would bring the same level of scalability, trust, and transparency that players like Toucan Protocol are seeking to bring to the carbon markets. New opportunities include:

If done well, these applications could create a unique opportunity to skip the fragmentation and lack of standardization that plagues voluntary carbon markets, and potentially create a more liquid, flexible and resilient ecosystem altogether.

Suggestions on what to cover next? Let me know @DrHolWat 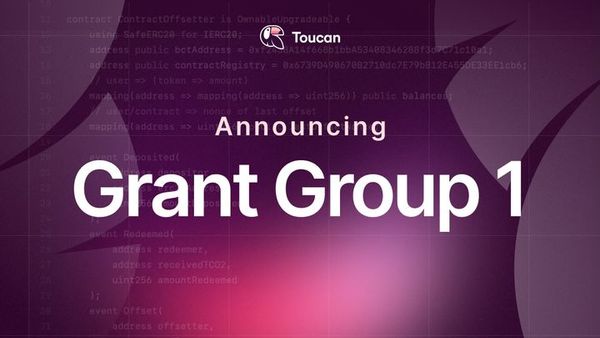 Economics should be regenerative by design. A living example for this is our fee structure: 80% of specific fees are used to retire the lowest-quality carbon credits in Toucan carbon pools.

From ocean conservation to climate-positive NFTs, ReFi projects are changing the world; the need for greater policy scrutiny; blockchain and voluntary carbon markets